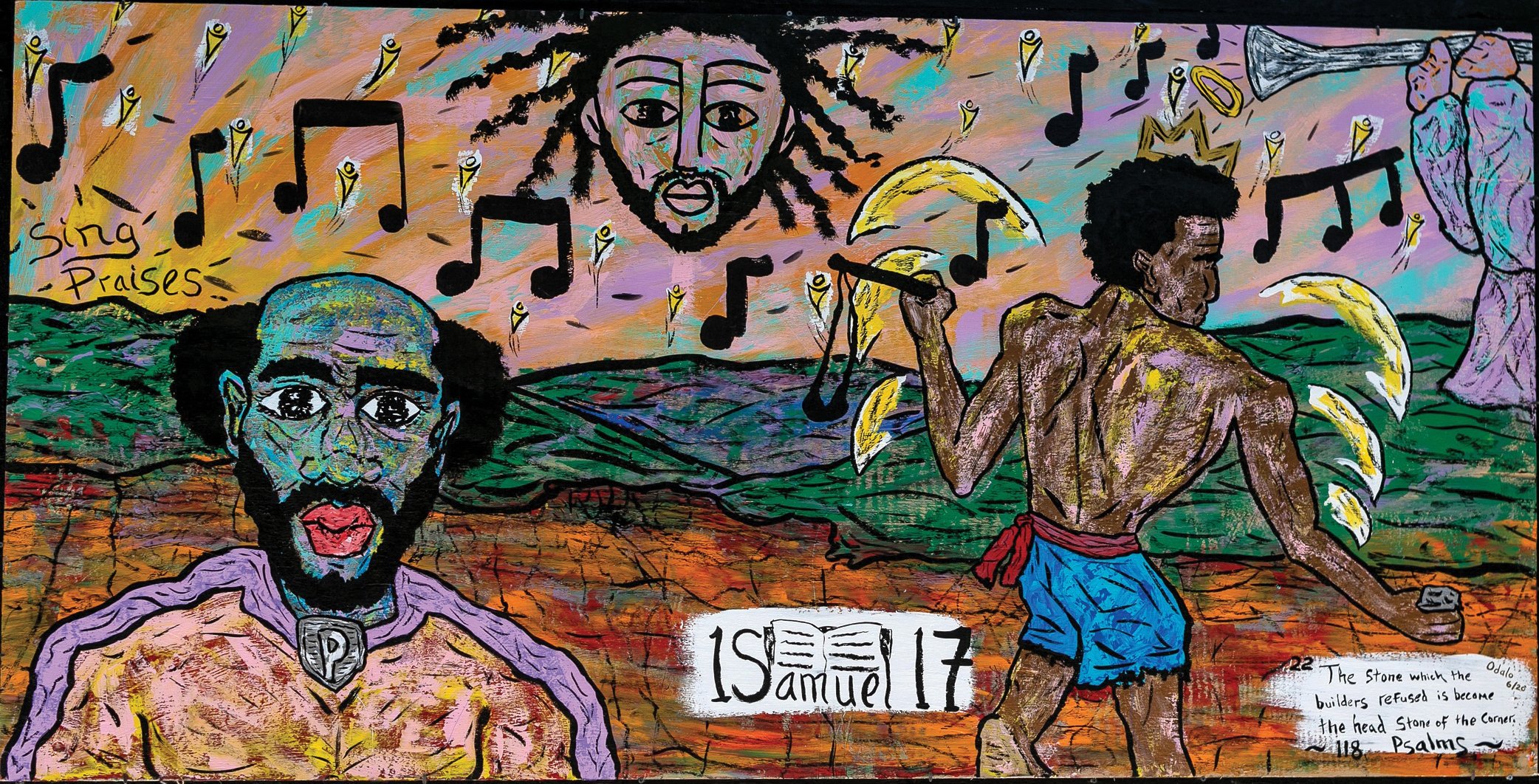 Artist’s Statement:
1 Samuel 17 is a verse from the holy scriptures of the Bible in a chapter centered on the battle between the Children of Israel and the Philistines, primarily the monumental faceoff between David and Goliath. In the scene, we discover a nation of people weary and afraid of battling the mighty Goliath and his people, who are terrorizing the Israelites. A young David walks up nonchalantly and is inspired to take on the battle and face the terrifying giant himself that everyone else is so afraid of. This battle and moment where David picks up a few stones, which he uses to slay the mighty beast, symbolizes the power and bravery encapsuled in our youth, coming together to take on the power structures suppressing many of the varied facets of our country and nation.

The people have come together resoundingly to demand justice and equality for African-Americans and Black people in general—both home and abroad. The people have come together from just about every sector to join the fight and protest for equality. David symbolizes our society coming together in this new age and time, under a plaguing situation of pestilence (COVID-19), global warming, police brutality, the call for education reform, lack of trust in leadership and news reporting, and the ever-rising economic crisis worldwide symbolized by Goliath (unseen in the mural, as most systematic issues are hard for most people to identify directly at the core and put a single face to). The Apostle Paul is depicted as well, as a symbol of a new and united thought, rooted in the belief in a greater destiny for all. The trumpet, being sounded by the Angel, signifies the call for change. Together, the world could usher in a brighter, and more harmonious future world, constructively. This painting, 1 Samuel 17, foretells that brighter destiny.

1 Samuel 17 tells the story of a battle between the Philistines and the Israelites a long time ago. Goliath, a huge man in full armor, taunts and mocks the Israelites for 40 days. David, a very small, young shepherd, arrives to the battlefield with food for his brothers. When David sees what is going on, he volunteers to fight Goliath. The king of the Israelites laughs at the idea, but he is desperate, so the king then allows it, and gives David his armor. But David finds it too bulky, so he takes it off and grabs 5 stones and his sling and goes into battle. Goliath looks at him and laughs and insults him. David swings his sling and hits Goliath on the forehead with the first stone, and Goliath falls and dies.
The Israelites win the battle.

GUIDANCE FOR TEACHERS
Back to Mural Gallery
#5 - Untitled |George Floyd|